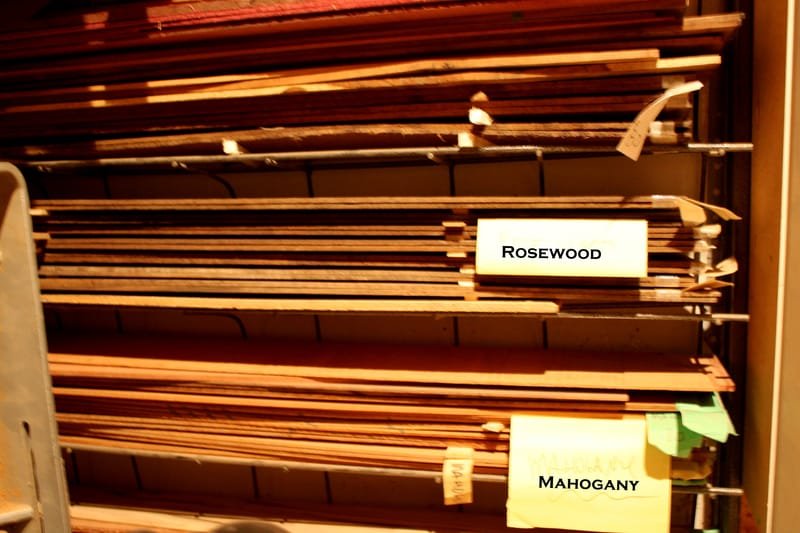 Sitka Spruce
Sitka spruce is the top wood standard of the modern era. It’s used on 85-90 percent of the guitars built today. Its dynamic range is very broad, allowing for everything from aggressive strumming and flatpicking to fingerpicking. Sitka spruce is the choice for an all-around great guitar. It goes Well With all styles of guitars and players.

Engelmann Spruce
Engelmann is also known as white, European or German spruce. It is usually visually distinguishable from Sitka by its creamier complexion. Engelmann trees these days are so small and master grade wood is difficult to find. Engelmann has a mature tone, and yields a slightly richer midrange than Sitka, which makes a guitar sound a bit older. It needs less time than spruce to open up.It really goes well with all styles of guitars and players.

Cedar ls less dense that Spruce and produces a warmer tone. Players with a lighter touch will love this tonewood. It produces more volume at a lighter touch than Spruce. It is not recommended for hard heavy strumming. It goes best with Walnut and Rosewood.

Mahogany
Mahogany is a good wood to anchor our survey of tones, as a lot of other wood tones can be described in relation to it. Its essential sonic profile is well represented in the midrange frequencies. Acoustic guitars in general tend to live in the midrange portion of the sound spectrum, but mahogany in particular displays a lot of midrange character. That thick, present midrange sound is sometimes described in guitar circles as meaty, organic or even “chewy” — wherever a player digs in on the fretboard, they’re tapping into the core of the harmonic content of what a guitar produces. Those great midrange frequencies produce overtones that stack up and produce bloom, giving the sound extra girth. When one hears the resulting harmonics, the “chewy” tone serves up a big mouthful of midrange. As a popular tonewood for many decades, mahogany has been used on scads of old school acoustic recordings and that sonic heritage carries across various strains of roots music, from blues to folk to slack key.
Goes well with a broad range of players and musical styles; people who like a well-balanced tone, nice dynamic range and a healthy serving of overtones. Blues and other rootsy players tend to respond well to mahogany’s midrange character. A smaller body mahogany guitar might appeal to fingerstyle players, whereas more aggressive flatpickers might opt for a mahogany Dreadnought or Jumbo. For versatility, a mahogany OM is a good bet. Because of mahogany’s midrange, a player with “dark hands” will tend to sound darker on a mahogany guitar. A bright player will sound slightly less bright.

Indian Rosewood
One of the most popular and traditional guitar woods of all time, rosewood takes the tone of mahogany and expands it in both directions. Rosewood sounds deeper in the low end and brighter on the top end. It has less midrange bloom than mahogany. Like mahogany, rosewood’s vintage heritage has helped firmly establish its acoustic legacy. It’s a great sound in part because we know that sound. In some music circles in which preserving the traditional sound helps bring a sense of authenticity to the music rosewood has an iconic status. Also like mahogany, rosewood is a versatile tonewood, which has contributed to its popularity. One can fingerpick it, strum it and flatpick it. It’s very consistent, so players can usually rely on it to deliver.

Walnut
Another beautiful hardwood, walnut has a similar density and stiffness to koa, with a similar tightness initially. Like koa, it tends to have a bright top end, but with a more present midrange, somewhere between mahogany and rosewood. Walnut also starts off a little deeper on the low end, initially giving it a slightly woodier sound than koa. The low end will continue to fill out after being played in. Goes well with players who like a blend of brightness, projection and warm overtones. A smaller-bodied walnut guitar with a cedar top would likely appeal to fingerstyle players, while flatpickers and strummers on a larger body with a spruce top will find ample horsepower, low end and crisp highs to support an aggressive attack.

Maple
Maple grows right out our back door here in British Columbia. A dense hardwood, maple’s tone is very focused. Often described as having a “bright” sound, maple has fewer overtones than other medium-density woods, resulting in quicker note decay. This makes it a preferred guitar wood for live performance because it cuts through a mix well, allows the acoustic sound to be heard, and is less prone to feedback issues. It has some midrange, and a lot more treble sparkle than rosewood. It goes Well With live band performances, recording, lead players who like clean articulation and note definition.

Back and side wood
The back and sides, constructed of hardwood, provide structural support for the soundboard and neck. They also form a resonating chamber; that is, they amplify the sounds from the strings and soundboard. Although they have less impact on sound than the top it is important to consider the wood type used in the back and sides. Rosewood is the traditional wood used on upper end guitars. Softer hardwoods such as mahogany, walnut and maple are excellent and less expensive alternatives to rosewood. Hardwood veneers are used in the back and sides of most guitars costing under $1000. Hardwood veneers have 95% of the musical properties of solid hardwood but are stronger, less prone to cracking and relatively inexpensive. Nevertheless, if you can afford it, a well designed and constructed solid wood guitar offers the ultimate tone.